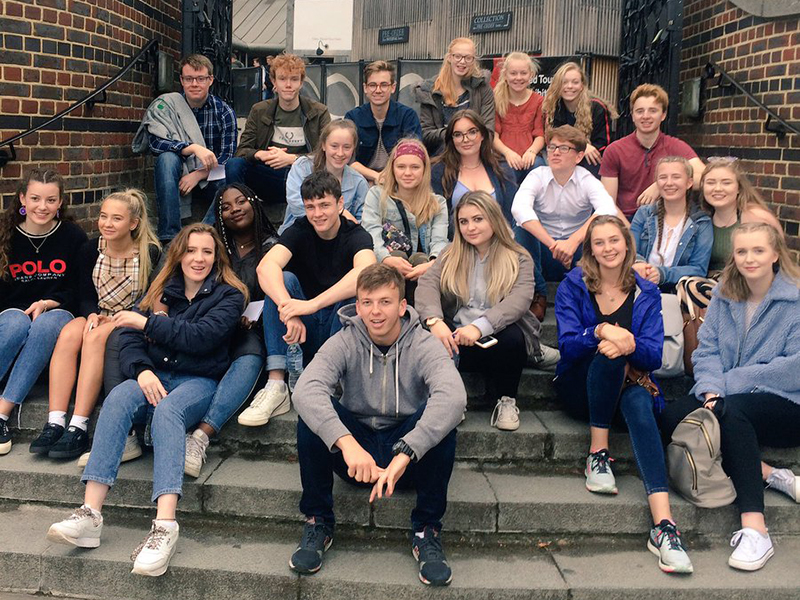 Our A level English and Drama pupils have just returned from their annual trip to London, where they enjoyed some fantastic theatre, post-show discussions, a workshop at The Globe and the chance to meet cast members and industry professionals (including Bill Nighy!).

After exploring some of the capital’s sights, the group of 24 students took in one of the West End’s newest and award-winning shows ‘Everybody’s Talking About Jamie.’ Based on the documentary following Jamie Campbell, a 16 year old boy exploring his ambition to be a drag performer, Everybody’s Talking About Jamie is a vibrant, energetic but enlightening production. Our students were fortunate enough to be invited to a private post-show discussion with the cast, providing the pupils with the opportunity to speak to a professional cast, seek advice for their own performances and get an insight into what it takes to bring a new musical to the West End, particularly one which deals with such an important topic.

On the same evening, they were immersed in the world of The Jungle, a play set in the refugee camp in Calais. Sitting in the ‘Afghan Café’, they witnessed its birth, life and demolition whilst sitting mere centimetres from the actors. It was an emotive, uplifting, uncompromising glimpse into the world of thousands of refugees who spent their time in The Jungle.  A truly phenomenal, all-consuming play that gripped the audience and more than lived up to its countless 5 star reviews. Then, as if seeing a spectacular piece of theatre wasn’t enough, our students emerged from the venue to find actor Bill Nighy outside. He was very generous with his time and posed for photographs with them (and some of the very excited staff).

Following a well-earned rest, they headed to The Globe next where they enjoyed a tour of the theatre and participated in a workshop based on Shakespeare’s language and the characters of Othello, run by one of The Globe’s actor-facilitators. Both the English and Drama students performed well in the workshop and responded insightfully when analysing the text, despite being observed by some significant figures at The Globe amongst others. Following lunch on the Southbank, the final show of the trip was Othello at The Globe with Mark Rylance playing the role of Iago. It was fantastic to see one of The Globe’s stalwart performers in action in one of Shakespeare’s most iconic roles.

The pupils came back inspired by their experiences and ready to apply what they’d learnt to their studies.