A review by Miles Warburton:

This year, Giggleswick Junior School brought all the fun and adventure of the Wild West to the Richard Whiteley Theatre for its Year 3 to 6 production of Ye Ha! Most striking was how the children captivated and engaged the audience from the first scene right through to the last. The detailed and intricate set immediately transported everyone watching back to the Wild West and the brilliant performances of the children involved allowed you to suspend disbelief for the entire show. This production captured the freedom and spirit of life in a simpler time but also pointed to the dangers and tensions that arise in a lawless society. A particular highlight was the final showdown between a mysterious, masked figure and the town’s double-crossing Mayor Tex Truman. You could cut the tension with a knife as a classic Mexican stand-off played out.

Doing their best to retain order in Splodge City is the newly-elected Sherriff and reluctant hero of the play: Wilbur Hubbard, played sensitively by Martha Lloyd, who had the unenviable task of singing the show’s opening song on her own. Well done Martha! Joining Wilbur on an epic quest to rid the town of wrongdoers is Billy-Jo Brisket, a wandering vigilante who does not believe being a girl should stop her from doing good. This part was undertaken enthusiastically by Lily Truscott who was always on hand to swoop in to save the day. Together, the two seemed unstoppable and these young actors illustrated with ease a real sense of comradery and trust in one another.

Other supporting roles also stood out during the performance, including the dastardly pair Howling Mad Dog McNut and Bronco Bill (played menacingly by Max Scholey and Georgia Lewis respectively), the protective and feisty Ma Hubbard (Elodie Martin’s convincing accent was impressively sustained throughout), and Rafferty Bannister’s Chip Checker was comforting as the show’s narrator and resident barman.

The real key to the success of the performance however was the exceptional teamwork from every single ensemble member – it was often easy to forget that some of them were only in Year 3! The complex choreography was performed expertly, as were the tricky musical numbers, and every single participant seemed to be having a fantastic time onstage. This is always what wins over an audience in the end; the cast’s sense of fun became infectious, sweeping the audience off their feet to a Little Old Town in the Wild Wild West. Everyone was clapping along by the end of this show and there were several audience members clearly keen to join in the barn dance in the final number.

This was a production that allowed you to escape the hardships of modern life and take you back to a far simpler and more care-free way of living. Ye-Ha! 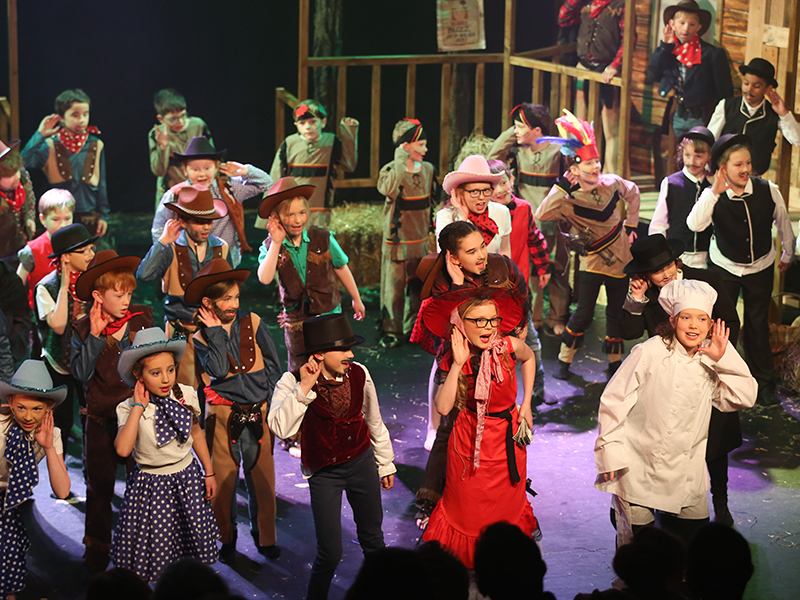